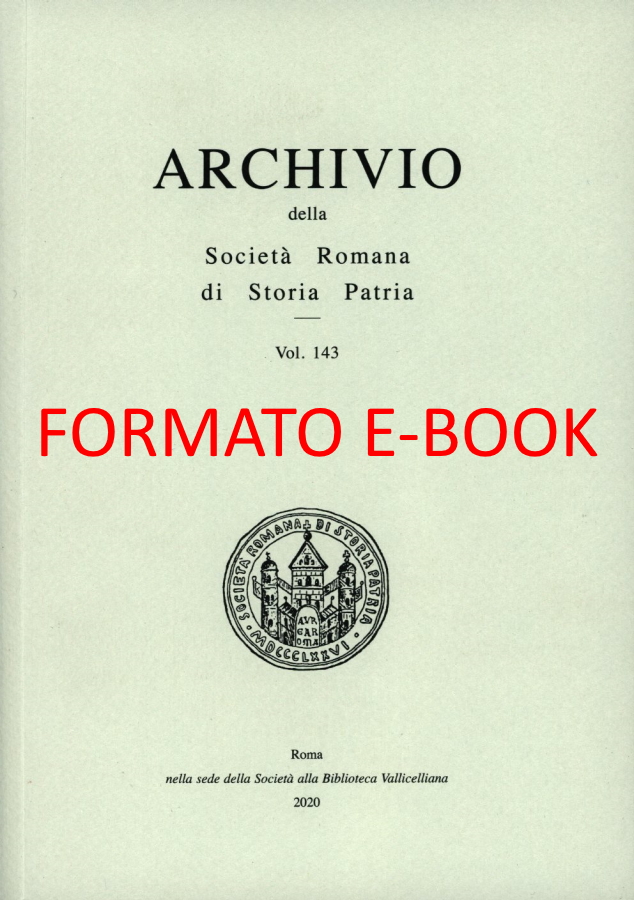 Since the creation of the Kingdom of Hungary in the year 1000, its political and economic relations with Rome and the papacy were deep and continuous. The documentation describes many personalities — aristocrats, clerics, orators, ambassadors, crusaders, travellers, pilgrims, intellectuals, students — of social origins ranging from nobilis to homo novus who arrived in Rome and in the lands of the Church throughout the Middle Ages. This contribution aims to highlight some of these figures of the political, economic, and cultural élites of the Kingdom of Hungary and its Transylvanian lands, not always known to Western historiography.

The Counts of Anguillara were one of the major families of rural lords in the Patrimony of Saint Peter in Tuscia. The first uncertain mentions of the lineage date back to the beginning of the eleventh century, but the real expansion of its patrimony began in the thirteenth century, as indicated by the possession of a series of castles. A turning point in the history of this family is represented by the two-year period 1346-1347, when the Anguillaras broke their familial cohesion and divided into two branches. Certainly, the most important member was Count Everso, who around the middle of the 15th century managed to build a real territorial state within the Patrimony of Saint Peter. Within one year of his death in 1465, however, his sons were definitively defeated by the militia of Pope Paul II and lost all the castles inherited from their father.

The purpose of this short work is to focus attention on a subject that is still little investigated by historiography: Roman prisons in the fifteenth century. While we know very a great deal about how prisons functioned during the early modern age, we cannot say the same for the late Middle Ages. This article aims to fill this lacuna by examining the numerous and diverse documents preserved in Roman archives, and by comparing the case of Rome to that of other, recently investigated Italian cities, such as Milan, Venice, Florence and Bologna.

Unlike many national communities existing in Rome in the fifteenth century, the Corsicans — who were a large group and had long been well established in the city — did not create their own “national” confraternity until very late and not exclusively. The aim of this essay is to focus attention on the foundation of the “Compagnia del Carmine”, on its members and on the statute issued in 1543, and to situate that foundation within the history of the Corsican presence in Rome.

The reorganization of the Universitas Picture ac Miniature, following the Sack of Rome in 1527 and the resulting dispersal of Rome’s artists, began in 1533 and took place under the banner of Raphael’s legacy. It is the continuity with the master’s work that the first exiles returning to the city — his students and his collaborators — celebrated and pursued within the guild, together with the claim of a different status for the painter. These actions, carried on by their disciples, culminated in the transformation from guild to academy and the proclamation of the nobiltà della pittura by Pope Clement VIII Aldobrandini. This paper is dedicated to recovering the traces of these protagonists and their reciprocal relationships, investigated against the background of broader artistic history of Rome.

The Pauline Chapel was Michelangelo’s last fresco cycle. He was summoned by Pope Paul III Farnese to paint the new chapel built by Antonio da Sangallo the Younger in the Apostolic Palace. The Cappella Paolina replaced the old capella parva, which had been used to preserve the holy host and to elect the new pope in conclave. Michelangelo confined his work on the frescoes to painting the Conversion of St. Paul and the Crucifixion of St. Peter. Marcello Venusti continued the fresco cycle in 1549, but he had to stop working soon after the death of the Farnese pope in the same year. Michelangelo’s drawings and some of Venusti’s small scale paintings as well as other sources help to understand the original design of the Paolina.

The stories swirling about the Duke of Bracciano Paolo Giordano Orsini and his second wife Vittoria Accoramboni were followed closely by contemporary chroniclers until their tragic conclusion in December 1585. Contemporary interest in these events was driven by their great political significance. They were not about private crimes but about something that called into question the morality of the pope and those closest to him. The international dissemination of these stories and their subsequent literary popularity was due to a series of anonymous manuscripts called relazioni, the best known of which is attributed to the so-called Anonimo di Campidoglio.

The article presents the inventory of a palace belonging to the Portuguese physician Gabriel da Fonseca (1586?-1668), a notable doctor whose career in Rome spanned several decades. Brought to Rome by the resident Spanish ambassador at the beginning of the seventeenth century, Fonseca’s tenure in the city saw him become a professor at Sapienza University and personal physician to Pope Innocent X (1644- 1655). The inventory of his Roman palace in the rione of Parione, here published, shows that he was in contact with a number of important prelates and nobles, that he had significant investments in papal debt and property, and that he had accumulated a considerable art collection and library, rivaling that of other well-to-do contemporaries in the Eternal City. Careful study of this document enables us to better understand this important physician and man of science, his tastes and interests, and his relations and activities. It also demonstrates the care with which he had organized his investments to place them in the hands of his two sons so as to assure a continuity of the family name and patrimony.

In Palazzo Vidoni there are two marble high-reliefs representing the Adoration of the Virgin and the Annunciation to the Shepherds and the Madonna with the Blessing Christ Child, on which a recent restoration project has focused our attention for the first time. The former is a replica of a sculpture by Antonio Rossellino (Florence, Bargello Museum), of which two other versions in terracotta are known in Berlin and Amsterdam; the latter is taken from the medallion for the tomb of Cardinal Giacomo di Lusitania in San Miniato al Monte and based on a compositional scheme repeated in three other monuments by Rossellino himself. The two Roman works are to be considered ninteenth-century “forgeries,” a status that makes them significant markers of a phenomenon typical of the taste and culture of the time: such works were simultaneously an answer to market demands, and a marked of artists’ recuperation of Renaissance artistic traditions in the face of growing industrialization.

There is a rich bibliography on the Ponte Risorgimento in Rome. The new reading proposed here was possible thanks to the comparison of the documents preserved in the archives of the company of G.A. Porcheddu, Hennebique’s agent for Northern Italy and builder of the bridge, with the documents kept at the Fonds Bétons Armés Hennebique in Paris and with those found in the Archivio Storico Capitolino. The daily correspondence, the sequence of which has been reconstructed by interpolating the papers from Turin, Rome and Paris, vividly reflects, even after one hundred years, the audacity, concern, pride, skills and excitement of the protagonists who designed and built the most daring bridge over the Tiber.